“Toy Story 4” may be an unnecessary addition to a franchise that seemed neatly wrapped up by the previous film, but Pixar has no time for your cynicism. It never has. One thing that’s kept the “Toy Story” franchise so solid after so many installments is its commitment to whatever emotional crisis its beloved gang of sentient toys (or honestly, Woody) is facing.

The main conundrum is then just what could be left to face. Woody (Tom Hanks) and his pals seemed to not only get their happy ending, but reassurance that life could go on with a new child, Bonnie (Madeleine McGraw), after Andy grew up and grew beyond them. So what else is left to stir any kind of conflict interesting enough to prevent one of the most creative and commercially successful film series ever made from devolving into one of the most cynical cash grabs of all time?

Thankfully, quite a bit. Woody is discovering that just because you’re willing to embark on a new phase in your life, it doesn’t mean the same old patterns will still suit. With Andy, Woody was the favorite toy, but Bonnie more often prefers to leave him in the closet while she plays with the rest of the gang. Thankfully, “Toy Story 4” isn’t interested in rehashing old struggles, so Woody no longer needs a favored status to care about the other toys or Bonnie’s happiness. 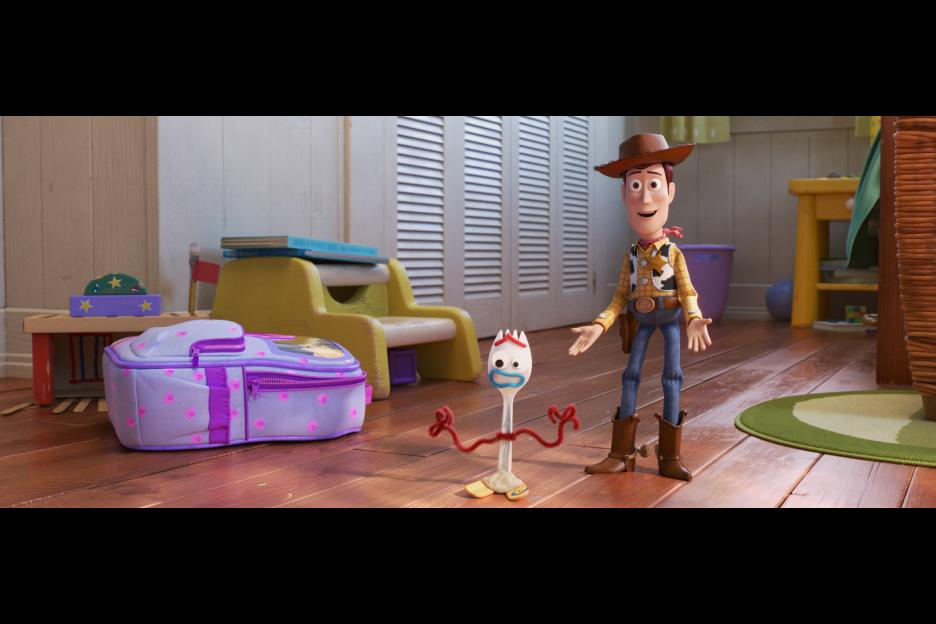 So when she crafts Forky (Tony Hale) into existence out of a spork and other materials and he becomes her favorite toy, Woody is firmly committed to keeping Forky around, despite the confused spork’s constant attempts to return to the trash heap where he feels he belongs. When one of Forky’s escape attempts finally succeeds on a family road trip, Woody goes after him, and they are finally able to bond and understand each other. Yet as one conflict seems to end, another reappears when Woody discovers his lost love Bo Peep (Annie Potts) residing in a carnival near the RV park where Bonnie and her parents are resting up. Nine years ago, Bo Peep was sold to another family, and Woody found himself unable to follow her and leave Andy, a decision that’s haunted him ever since.

Bo Peep’s return not only stirs up that history and the feelings that were part of it, it causes Woody to experience a crisis of his own. He’s always been sure about his purpose in life, but seeing Bo Peep embrace the freedom and independence of being a lost toy – a fate Woody has always feared – shows him another path he never considered. Bo Peep is also far from the delicate, demure toy she was in previous films, who stayed behind on adventures due to her more fragile exterior. She’s become a leader who assists other discarded toys, embraces life without a child, and plans to travel with the carnival to see more of the world, once again inviting Woody to come with her.

In any other film, the villainous, 1950s doll Gabby Gabby (Christina Hendricks) would be an excuse to offset the various existential crises in the film with action sequences. But Gabby is no mere distraction, and is menacing enough with her creepy ventriloquist doll henchmen to be a formidable threat, while possessing enough of a tragic history to tug on those heartstrings. Gabby hasn’t been played with due to her defective voice box, and she believes she’ll be considered a viable toy once again if she fixes it…by stealing Woody’s. 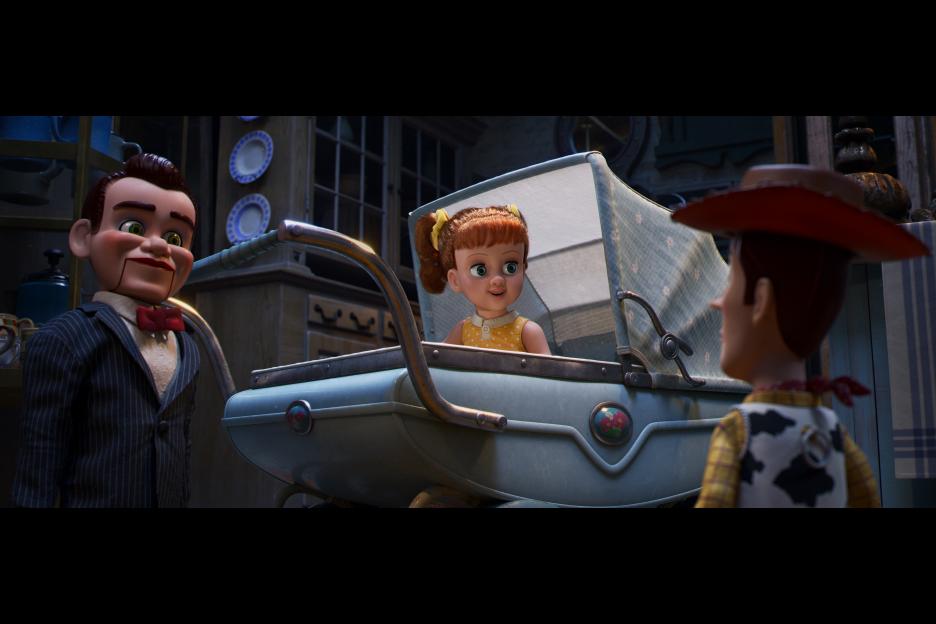 It all amounts to a case of white male anxiety, where an actual cowboy (well, kinda) who’s always been on top has to assess his place in a new world, one where women are not only demanding a voice, but carving out their own, less traditional paths. Other films would posit that this means Woody should step aside, or ramp up the danger represented by Gabby and Bo Peep, given how ambitious, powerful women are getting a bad rap nowadays. But neither are defined by Woody, or a need to lead him astray. They’re characters in their own right, and there’s no need for Woody to be defined by them and give up his passion. He can continue to assist other toys on a new path with Bo Peep, or he can remain with Bonnie and his family and continue to care for them.

Whatever choice he makes, count on Pixar to give us plenty of memorable emotional moments that will quickly become about as memorable as the furnace scene in “Toy Story 3,” where Woody and his friends made the choice to face what they believed was their impending death in each other’s arms. No scene comes close to those kind of stakes, but the urgency in “Toy Story 4” is felt nonetheless, dangling as it does the possibility of one of the most beloved movie families coming to end, along with animation that seems to get more lifelike with every film.

With such a focus one member of that family, the others become somewhat neglected. As the film adds more characters, most of whom lighten what would otherwise be a heavy emotional load, the film does become somewhat overstuffed. Fans of the Jessie (Joan Cusack) and Buzz (Tim Allen) relationship can expect to be disappointed, as the two barely even register as being together. Then again, one of the new additions includes Keanu Reeves as a Canadian stunt motorcylist in the vein of Evel Knievel, so there are compensations. (May the Keanaissance continue to bring joy throughout the land.) 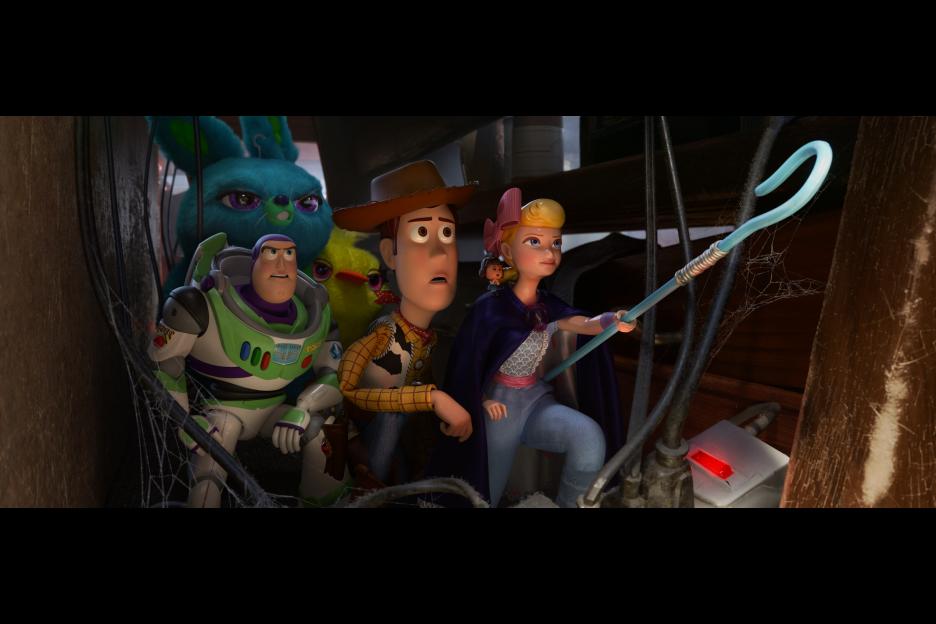 If “Toy Story 4” can be defined by one message, it’s “Be who you are right now.” Life may change, and your place in it can become frighteningly precarious, but you should never be defined by your past, whether it was scarred by tragedy, or the source of your happiest moments. Throughout it all, friendships, family, and love can last. To infinity and beyond.

from A Reel Of One’s Own http://bit.ly/2WFAmls
via IFTTT